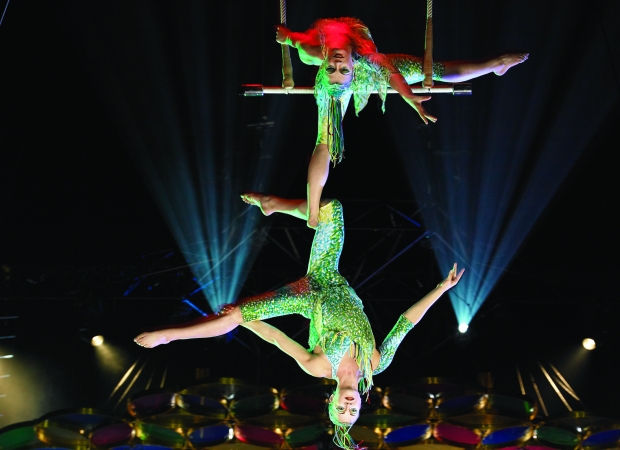 The critically celebrated international entertainment group Cirque du Soleil will perform for the first time ever in Riga, Latvia with its vibrant signature production Saltimbanco in December 2011 in collaboration with concert agency “FBI”. This timeless Cirque du Soleil opus hits a new part of the world never visited before with a series of exclusive shows in Riga starting on December 21 at “Arena Riga”. Tickets go on sale May 30 afternoon via “Biļešu serviss”, www.bilesuserviss.lv.

Saltimbanco is Cirque du Soleil’s longest-running touring show and has performed since 1992 to wide-spread acclaim to sell-out audiences all around the world (Europe, North and South America, Australia, Japan, and New Zealand) for more than 12 million enthusiastic fans.
Scott Heatherington, Ambassador of Canada in Latvia: “We are very proud and excited that after having presented its shows in over 300 cities on five continents, the world famous Cirque du Soleil will be performing in the Baltics for the first time. I saw Saltimbanco back home in Ottawa and enjoyed it immensely. I am sure that the public will be equally impressed with the outstanding artistry, music and acrobatics. Cirque du Soleil has always been a proud ambassador of Canada in each city and country they have visited.”
Finn Taylor, Cirque du Soleil Vice President for Arena Shows: “Cirque du Soleil is thrilled to be performing for the first time ever in Estonia, Latvia and Lithuania. Our live touring show Saltimbanco will present excitement and artistry through our unique fusion of acrobatics and circus arts in a live theatrical experience. Saltimbanco has wowed audiences around the globe and we are looking forward to performances in Tallinn, Riga and Vilnius.”
Media praise for Saltimbanco:
“Gracefully athletic theatre” – The London Times
“Human exuberance and physicality” – Variety Magazine (USA)
“Myth meets magic...An unearthly mixture of commedia dell'arte and rock-concert razzle” – The New York Times
Classic Cirque du Soleil at its best, Saltimbanco is a thrilling and kaleidoscopic celebration of awe-inspiring artistry and agility. With a cast of 50 high-caliber artists hailing from 20 different countries, Saltimbanco features breathtaking acrobatics and unbelievable athleticism during solo spotlights and epic ensembles. From the seemingly impossible balancing, jumping and spinning during the Chinese Poles or the Russian Swing to the gravity-defying Bungees and Trapeze, the crowd pleasing Juggling and Acrobatic Bicycle, to the celebrated and very unique Clowns. Technical expertise and extravagant design are woven together by uplifting spectacular costumes, amazing lighting, humor and enchanting music and magic. Full of colour, amusement and amazement, Saltimbanco is a fun show for the whole family to enjoy.
Saltimbanco — from the Italian “saltare in banco,” which literally means “to jump on a bench”—explores the urban experience in all its myriad forms: the people who live there, their idiosyncrasies and likenesses, families and groups, the hustle and bustle of the street and the towering heights of skyscrapers. A signature show, it is inspired by the urban fabric of the metropolis and its colourful inhabitants. Decidedly baroque in its visual vocabulary, the show’s eclectic cast of characters draws spectators into a fanciful, dreamlike world, an imaginary city where diversity is a cause for hope.
The equipment on tour, including the set and stage equipment, weigh 360,000 pounds (180 tons) and is transported in 16 semi-trailers. All costumes, including headpieces and shoes, are custom-made for the each individual performer at the Cirque du Soleil workshops in Montreal, Canada. The artists wear three to five different costumes during each performance and more than 2,500 costume pieces including 250 pairs of shoes travel from city to city in 50 road cases.
The world premiere of Saltimbanco was held in Montreal on April 23, 1992 under the big top (tent), which was the show’s home for 14 years, visiting more than 75 cities. In 2007, Saltimbanco was restaged to adapt to arena venues and now performs in approximately 40 cities each year.
TICKET INFO
Tickets are available on “Biļešu serviss” pay-offices across Latvia and on the internet www.bilesuserviss.lv from 20 LVL. For children until age of 5 tickets cost 7 LVL, scholars until age 15 receive 20% discount (except for tickets on the floor). Tickets go on sale May 30, 2011.
About Cirque du Soleil:
From a group of 20 street performers at its beginnings in 1984, Cirque du Soleil is a major Québec-based organization providing high-quality artistic entertainment. The company has more than 5,000 employees, including more than 1,300 artists from close to 50 different countries. Cirque du Soleil has brought wonder and delight to more than 100 million spectators in 300 cities on five continents. In 2011, Cirque du Soleil will present 22 shows simultaneously around the world. The International Headquarters are based in Montreal, Canada. For more information, visit www.cirquedusoleil.com
S H O W  I N F O R M A T I O N:
RIGA
VENUE:
“Arena Riga”
DATES:
December 21 – December 23, 2011
SHOW TIMES:
Wed-Fri, doors open 6pm, show starts at 7pm