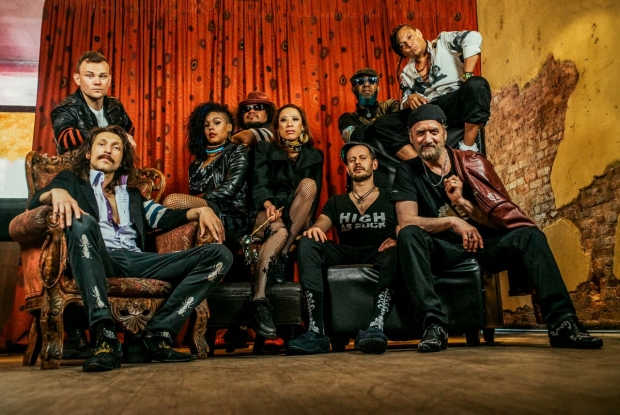 Extravagant stage image, hooligans-like behaviour and music filled with energy that exceeds boundaries of genres and despises society’s norms - the American gypsy punk-rock union Gogol Bordello challenges and fires up its audience for almost twenty years already. Each year the band plays around two hundred shows and most of them are sold out, just like the previous concert in Riga. On May 20, 2018, Gogol Bordello will return to the Palladium concert hall, offering hot dances, waves of wine and a full list of songs from their newest album  “Seekers and Finders”.

Gogol Bordello is like a manifestation of multiculturalism - the band emerged in America,  in “the land of opportunities”,  its leader and source of inspiration was born in Ukraine, while the rest of the diverse group comes from Russia, Belarus, Ethiopia and Ecuador. They consider punk-rock a lifestyle, while musically prefer romantic gypsy motives and often quite brutal jamboree. Even though most of their lyrics are in English, the accent that comes from Slavic and Yiddish influences is inevitable. The praise of revelry and bohemia makes Gogol Bordello a traveling party that any true music lover can't resist.

World’s most influential media have devoted wide range of  reviews to Gogol Bordello, from an absolute admiration to a complete misunderstanding. British “The Independent” calls this fun band the "Balkan – American The Pogues", drawing parallels with the Irish nonconformist Shane MacGowan and his band, which in some way has inspired the creation of Gogol Bordello. “Pichfork” is carried away by the band leader’s Eugene Hütz charisma (he is also the creator of the band and its most scandalous member who arrived in USA as a political refugee and afterwords has managed to be even part of juridical processes with former musicians of Gogol Bordello), that stresses “us towards them” attitude which is so typical to punk culture. “The Wall Street Journal” notes Gogol Bordello’s talent and their ability to combine Eastern European characteristics with a classical punk-rock leading to the most savage performances that one can imagine. However on one thing all the music critics agree - Gogol Bordello is a band which seen performing live won’t leave you indifferent.

Provocation is the cornerstone of Gogol Bordello's existence, while vigorous tones as well as cynically amusing texts are its brand mark. Gogol Bordello during their musical career has released ten full-length albums, have managed to be part of several critically acclaimed indie movies, as well as to play thousands of concerts without losing their unique sound and attitude. Musicians will arrive in Riga in the mood of their latest album, but also taking along luggage with the best songs from their most beloved albums.

Tickets for Gogol Bordello show at Palladium Riga concert hall on May 20 will be available at Bilesu Serviss offices and www.bilesuserviss.lv from December 21, the first ticket prices will start from 29 EUR.