The US rock superstars Kings of Leon will deliver one of their few scheduled European solo performances at the Mezaparks Song Festival Grounds on June 25th in Riga. It will be their first and only show in the region, including Russia, Finland and Belarus, which will at length gather a large number of foreign visitors for an open-air performance of such magnitude. General tickets will go on sale from 14 February, and on pre-sale - from 11 February.

The show's organiser Ģirts Majors: "The Kings of Leon show will be the first foreign open-air performance, which, since the legendary Metallica gig at the Skonto Stadium back in 2008, will once again gather tens of thousands of showgoers in Latvia. Although Madonna, Red Hot Chili Peppers and Robbie Williams all performed in Tallinn, the Kings of Leon performance will tip back the scales, with this year's biggest music event taking place in Riga."

Only 20 000 tickets will be available in Latvia for the band's only show in the region. The remaining tickets will go on sale in Estonia, Lithuania, Finland, Russia and Belarus – countries that the band also hasn't performed in yet. Last year Kings of Leon released their sixth studio album Mechanical Bull, to which this tour is also dedicated. The ticket prices for the upcoming show will be considerable cheaper than in other European countries.

The band, compiled of four family members, achieved initial success in the United Kingdom with nine UK TOP 40 singles within a relatively short time period. All three of the band's albums peaked at the TOP 5 of the UK Albums Chart in 2008. The release of Only by the Night saw Kings of Leon transform into true global superstars. Finding their voice and grasping toward U2 levels of spacious grandeur, Kings of Leon cemented their musical style and star status with such chart topping singles like "Use Somebody" and "Sex On Fire", which have become huge global hits.

The band's frontman Anthony Caleb Followill: “I think it’s going to be a lot of fun. I think it’s the first time in a while that our fans have had a breather from us and I think the fact that we’ve been away for a minute … I think people are really excited, and I know we’re going to try to bring something special to the table.”

Tickets will go on general sale on 14 February at 10am in all Ticketpro and Biļešu Serviss box-offices as well as online. Presale tickets will be available from 11 February 10am for the members of FBI Concert Club (register here free of charge) and also to registered users of positivus.com. General admission – EUR 45, with prices set to increase up to EUR 55. No designated fan sector available.

The concert is organised by Positivus Music and FBI. 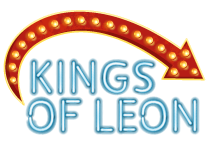