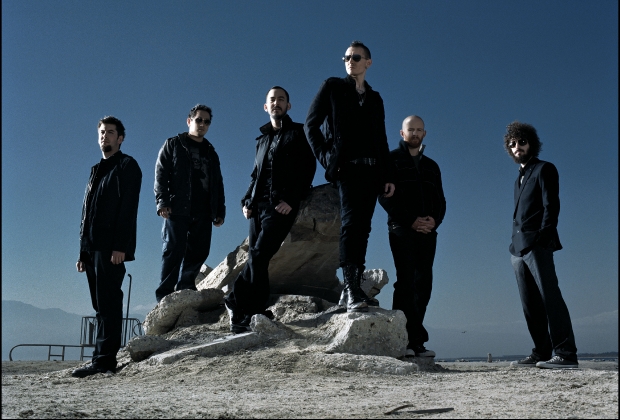 Concert agency “FBI” informs: on June 11th the famous rock band “Linkin Park” will give a concert in “Arena Riga” and popularize their latest album “Minutes to Midnight”.

Since the foundation of band in 1996, “Linkin Park” has sold more than 50 million album copies and they own two Grammy awards.

The debut album “Hybrid Theory” that was released in October 2000, was characterized by the influential magazine “Rolling Stone” as a „CD with 12 wonderful songs that perfectly combine the sound of metal and hip-hop”. The band got their first Grammy award for “Crawling” — a song from this album.

Their second album “Meteora” (2003) showed that “Linkin Park” are willing to look for some new sound elements: from the heavy guitar in “Somewhere I Belong” to the strings and piano, that we can hear in “Breaking The Habit”. In the very first week, more than 800 000 album copies were sold in USA and the album was No.1 on the US Billboard album chart.

In 2006, “Linkin Park” get their second Grammy award for the song “Numb/Encore” (featuring Jay-Z). That year the members of the band - Chester Bennington (vocals), Mike Shinoda (vocals), Rob Bourdon (drums), Brad Delson (guitar), Joe Hahn (DJ), and David "Phoenix" Farrell (bass guitar) — returned to the studio to continue the work on the new album. Under the supervision of the producer Rick Rubin (worked also with “AC/DC”, “Red Hot Chili Peppers” and “U2”) the album “Minutes to Midnight” came into daylight in May 14, 2007, and already during the first week more than 600 000 album copies were sold. Critics think that this album is the biggest achievement of the band in their history. The first single of the album, “What I've Done”, made its debut on the US Billboard chart at No.7 becoming the band’s most successful single of all times. The album itself made its debut as No.1 in the US and 15 other countries, including Great Britain, Germany and France.

Singer Mike Shinoda characterizes the new album as means that allowed the band to break the opinion about their sound. “We were not afraid to experiment with vocal performance, new instruments. In one song, me and Chester even tried playing the drums, while Rob went to sit at the piano and wrote a song! Of course, we didn’t include these “percussions” in the album, but it helped us to achieve the result we have hoped for. We think that we have managed to get the sound that characterizes “Linkin park” best.

The band has repeatedly been awarded with „MTV Europe Music Awards” and „MTV Video Music Awards”. In 2007, MTV audience voted for „Linkin Park” as the best band of the year.

Tickets for the concert of „Linkin Park” in Latvia will be on sale from 10:00 a.m. April 28th, at all “Biļešu serviss” pay-offices and on the Internet www.bilesuserviss.lv. Tickets will also be available at „Piletilevi” pay-offices in Estonia.

Starting from Wednesday, April 23rd 10:00 a.m., a pre-sale of the concert tickets will be commenced for the users of the “Amigo” phone card (more information: www.amigo.lv) and for the members of “FBI Concert Club”. When buying the ticket, the members of “FBI Concert Club” must present a code received via e-mail, or the code must be typed when buying the ticket online at www.bilesuserviss.lv. This offer is also applicable to all those, who have not been registered yet. Registration can be made at „FBI” homepage www.fbi.lv. The price of the first 1,000 standing tickets will be LVL 20.