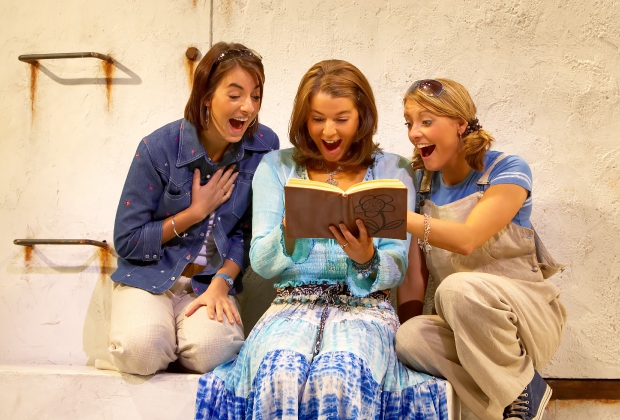 “The perfect ticket for a feel-good night out” - Daily Telegraph
“One of the most entertaining musicals ever to hit these shores” – Belfast Telegraph
“An explosion of dance and colour” - Sunday Independent, Ireland
“A top night’s entertainment” - Edinburgh Evening News
“****A glorious good night out”- The Scotsman

Following its hugely successful run throughout 2005, the International Tour of MAMMA MIA! will come to Riga for a 1 week run from 8th May 2007 until 13th May 2007. Over the last two years, The International Tour has already performed in Dublin, Edinburgh, South Africa, Tallinn, Lisbon, Paris, Brussels, throughout Germany, Vienna, Zurich, Belfast and has already been seen by over 1.3 million people and to follow with MAMMA MIA! will now be coming to the capital city of Latvia and will have 8 shows at “Arena Riga”.

Inspired by the story-telling magic of ABBA’s timeless songs, writer Catherine Johnson’s sunny, funny tale of family and friendship unfolds on a Greek island paradise. On the eve of her wedding, a daughter’s quest to discover the identity of her father brings 3 men from her mother’s past back to the island they last visited 20 years ago.

The production features 22 of ABBA’s hits including: CHIQUITITA, DANCING QUEEN, I HAVE A DREAM, KNOWING ME, KNOWING YOU, THE WINNER TAKES IT ALL, SUPER TROUPER, TAKE A CHANCE ON ME and VOULEZ-VOUS.

Commenting upon this exciting announcement, BDG Events director Inga Kadeka, said: “Attracting the World’s No.1 show is a fantastic. MAMMA MIA! is sure to be a huge hit in Riga and we are delighted that we have been selected as an upcoming port of call for the International Tour.”

Producer Judy Craymer was first inspired to create a musical using the music of ABBA to tell an original story in 1987. Since its stage premiere in 1999, MAMMA MIA! has gone on to gross over 2 billion dollars worldwide. More than 27 million people have seen the show worldwide.

A legacy of extraordinary songs and worldwide record sales of over 360 million have ensured ABBA a lasting popularity. The group had 9 number one singles in the UK and 9 number one albums. ABBA GOLD, first released in 1992, spent 206 weeks in the album charts. It entered the charts at number one. It was re-issued in 1999, as part of 25th anniversary year celebrations marking ABBA’s Eurovision win, and went back to the top of the charts. It remains one of the biggest selling music albums of all-time. To date, only The Beatles, Elvis Presley, Cliff Richard and Madonna have been more successful than ABBA in the UK.

The International Tour is produced by Judy Craymer, Richard East and Björn Ulvaeus for Littlestar in association with Universal, Stage Entertainment and NGM.

Further information on MAMMA MIA! productions worldwide can be found at www.mamma-mia.com

Booking information – Tickets on sale from 22nd of November 2006. Tickets available at “Biļešu Serviss” ticket selling points across all country.