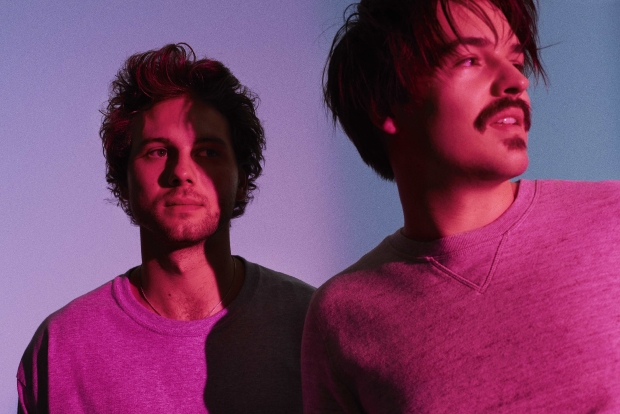 Cheerful melodies with slightly resigned intonation, contemporary folk music with elements of reggae and expressive electronic beats characterise best German folk band Milky Chance, which will perform in Riga, at Palladium concert hall on February 14. Their debut single “Stolen Dance” seduced millions of people in Europe and outside of its borders, this year the band released a new album “Blossom” that has much more mature sound, nonetheless it hasn’t made the musicians to lose their creative signature.

It seems unbelievable now that the debut hit "Stolen Dance" and its subsequent album “Sadnecessary” was recorded in a very simple home-based recording studio and the first fans appeared thanks to the musician's YouTube account. However, very soon the folk-electronic project became popular – firstly in their home country Germany, later elsewhere in Europe – and received significant media attention thanks to the excellent combination of vocal of the singer Clemens Rehbein and simple, easy-to-dance rhythms created by his colleague Philip Dausch. After first success the worldwide tour and acknowledgment in Europe and over the ocean followed, as well as hundreds of millions Youtube views.

At the beginning Milky Chance was a project of two good friends, but for the recording of second album “Blossom” their were joined by the guitarist Antonio Greger who has added to the band’s sound new dynamics and vitality. The album “Blossom” entirely reflects the savage load of energy that can be felt in band's concerts - although the tunes are emotional, simple, sometimes even gentle and sentimental, at the same time, the rhythm and elements of electronics make them a real party music. Each Milky Chance concert is an absolute dedication from musicians and a genuine joy in the audience. That is something that visitors of Summer Sound 2016 festival could learn themselves  – after the festival many agreed that Milky Chance’s performance was truly powerful.

The new record’s “Blossom” mood is best described by its first single “Cocoon”, the Latvian viewers will notice both familiar places and faces in the song’s official video. The music video is filmed in Riga, directed by the Latvian director Dāvis Sīlis, in the video production several Latvian actors have taken part, such as Elīna Vaska, Ivars Puga, Anete Saulīte, Kaspars Zāle and others. Since its appearance on Youtube, the video has been viewed more then 15 million times.

Tickets for the Milky Chance concert at the Palladium Concert Hall are available at Bilesu Serviss selling points and on the Internet.