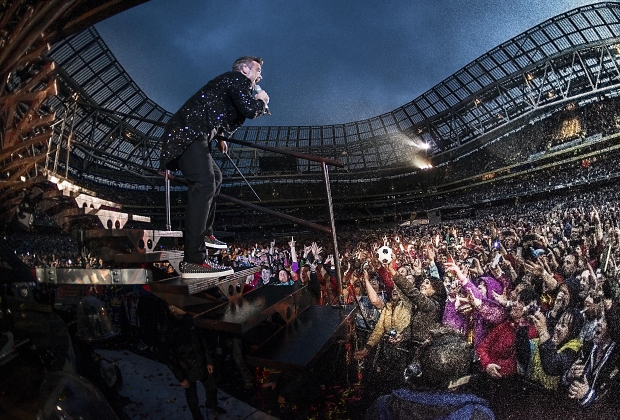 In order to participate in the contest, one should submit a short video describing how Robbie's music has influenced his or her life. For detailed information and conditions of the contest please visit Robbie’s official Facebook page.

“Do your best and we get to meet in Tallinn,” Robbie Williams said encouraging all his fans to participate in this exiting new contest on his Facebook page.

Robbie kicked off the new Take The Crown Stadium Tour last Friday in Dublin, which is his first solo stadium tour since 2006. Ten years after the legendary Knebworth recordings, this summer’s Take The Crown tour will be filmed in Tallinn, Estonia on August 20. Ten lucky fans will have a chance of a lifetime to meet Robbie in Tallinn, be a part of the documentary film, and enjoy superstar treatment with a special program of activities in Estonia.

“Robbie Williams – Live in Tallinn” will be shot at Tallinn Song Festival Grounds, a unique and historic open-air venue on the picturesque seaside of the capital of Estonia. On the day of Robbie’s performance, Estonia also celebrates its re-Independence Day.

"I have never been to Estonia and I am excited to film my brilliant show on re-Independence Day,” Robbie added.

Robbie is the first major international performer to film his concert in Tallinn, a special occasion for all his fans to become a part of music history. “Robbie Williams – Live in Tallinn” will be directed by Russell Thomas and Peeter Rebane.

The Facebook fan contest is coordinated by production company Factory. “Robbie Williams - Live in Tallinn” is organised in cooperation with the Estonian Tourist Board and City of Tallinn. For more information on Tallinn and Estonia, check out visitestonia.com.

ROBBIE WILLIAMS: “TAKE THE CROWN” TOUR WILL BE FILMED IN TALLINN

ROBBIE WILLIAMS ANNOUNCES A EUROPEAN STADIUM TOUR FOR SUMMER 2013, HIS FIRST FULL TOUR FOR OVER SIX YEARS, WITH SHOW IN TALLINN ON 20 AUGUST