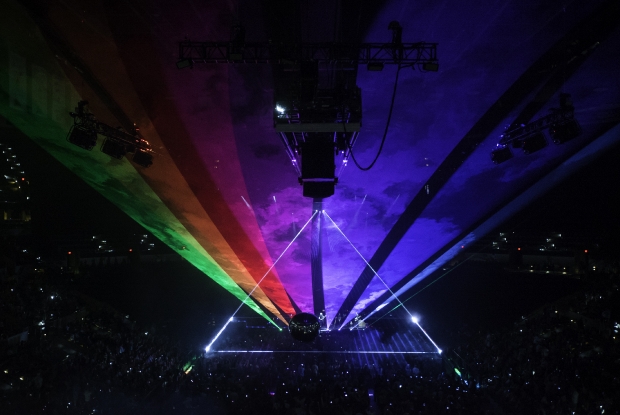 Pink Floyd founding member, visionary and creative genius Roger Waters will bring his pioneering new US + THEM show to Riga in the summer of 2018. Having gathered hundreds of thousands of euphoric fans and ecstatic music critics across the biggest cities in the United States since the beginning of summer, Roger Waters will deliver one of the most spectacular shows Arēna Rīga has ever hosted on August 24 of next year.

Tickets for the global US + THEM tour concert in Riga will go on sale on Thursday, October 5 at 10am across all “Biļešu serviss” networks. Members of FBI Concert Club and Positivus registered users will be able to purchase tickets during pre-sale, starting from Wednesday, October 4 at 10am.

Billboard has described the tour as having “the most striking cinematic theatrics ever employed on a rock stage,” adding that “there should be Oscars for this kind of work.” Music critics have near-unanimously hailed the multi-dimensional show to be powerfully executed, taking its audience on a musical journey.

The groundbreaking US + THEM world tour will showcase highlights from Pink Floyd’s greatest albums, such as “Dark Side of The Moon”, “The Wall”, “Animals” and “Wish You Were Here”. The show, which has been described as a “two-and-a-half-hour-long hit parade” (Westword) and “a classic-rock lovefest for fans, blending music with a message” (Tulsa World), will also feature songs from Waters’ critically acclaimed new album “Is This the Life We Really Want?,”.

Waters’ legendary live performances are renowned as immersive sensory experiences featuring high class, state-of-the-art audio visual production and breathtaking quad sound. This new tour promises to be no exception, following months of meticulous planning and visionary craft featuring drone-powered elements and laser projections. Hailed as “a riveting evening of entertainment for the ears and eyes” (SouthFlorida.com), with scenography that proves to be an unparalleled “jaw-dropping visual spectacle” (Las Vegas Weekly), Waters and his team have created an unbelievable show, enabling spectators to enjoy each and every second.

A sound system of the highest caliber, state-of-the-art audio visual production and breathtaking quad sounds have always been at the core of every Roger Waters tour, with his newest being no exception. The new US + THEM tour bears a distinct similarity to Water’s The Wall Live (2010-2013) sold-out world tour which was seen by more than 4 million fans globally and remains the highest grossing tour by any solo artist in music history.

Tickets to the US + THEM show will be available in all Biļešu Serviss box offices and www.bilesuserviss.lv/eng/ from October 5 for the initial price of EUR 59.