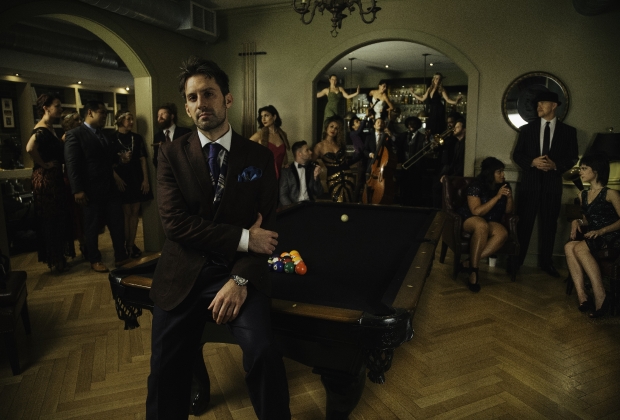 Scott Bradlee’s Postmodern Jukebox has amassed over 400 million YouTube views and 1.75 million subscribers, have performed on “Good Morning America,” topped iTunes/Billboard charts, been covered by NPR, Mother Jones, Huffington Post and the LA Times and drawn praise from the likes of Beyonce and Meghan Trainor. Now they’re taking their electrifying live show on the road for a headlining tour of Europe. The tour follows their recent sold-out run of the U.S. and Australia. Tickets for show in Palladium Riga on the 17th of May are available from www.bilesuserviss.lv and “Biļešu serviss” box-offices.

For the uninitiated, Postmodern Jukebox is a genre-busting, rotating collective of performers who have built a massive following by reimagining modern pop hits with a vintage twist. Postmodern Jukebox crosses musical boundaries and generations with their distinct take on songs originated by artists ranging from Lady Gaga and The Strokes to Katy Perry and the White Stripes. Their torch-like cover of Radiohead’s seminal ‘90s hit “Creep”- called “stunning” by the LA Times - has racked up over 14.2 million views. Their version of Miley Cyrus’ “We Can’t Stop” has drawn over 14.9 million views and Lorde said their rendition of “Royals,” which has been viewed over 14.5 million times, is her favorite.

Pianist, composer, and arranger Scott Bradlee created Postmodern Jukebox back in 2009 by uploading videos of himself playing pop hits in ragtime style. “There was this niche on YouTube where people were doing experimental, interesting, funny things with music,” he notes. “It was another way to reach an audience.”

One of his early clips amassed a meager 100 views, but drew the attention of award-winning novelist Neil Gaiman. The author tweeted about Bradlee’s playing to his millions-strong Twitter following. “Within a week,” says Bradlee, “more people had seen that video than had seen me play live my entire life.” To say things went viral from there is an understatement. Postmodern Jukebox has developed a niche all its own and performs a live show unlike any other – one that’s more of an experience than a concert.

“I started Postmodern Jukebox when I was living in a basement apartment,” says Bradlee, “and now we have 1.5 million subscribers, all acquired through word-of-mouth sharing through fans. Although the music industry ignored us for a long time - with some even calling the project a "gimmick,” they can't ignore us anymore, now that we've had sold out shows all over 4 continents. The fans have spoken, and it's clear that real, organic music performed in a timeless style is alive and well. I am personally so grateful for all of the support I've received, and for the continued opportunity to showcase talent that I believe is worthy of attention.”

Meghan Trainer - All About That Bass

Sam Smith - Stay With Me

Taylor Swift - Shake It Off