DAGAMBA TO PERFORM IN ARENA RIGA WITH THEIR MOST AMBITIOUS PERFORMANCE 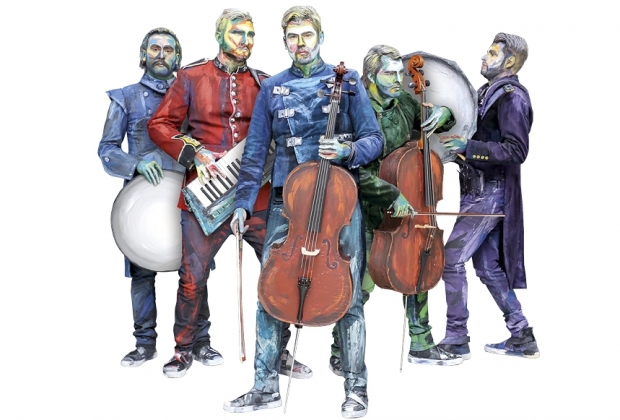 The band DAGAMBA - the hooligans of classical music realise a new video for the song “Nutcracker Rock” from the new “DAGAMBA feat TCHAIKOVSKY” concert program and announce an extraordinary show that will take place next year, April 12 in Arena Riga. Already starting from today tickets are available at “Biļešu Serviss” selling points. Only in shopping centre “Spice” tickets will be available for a special price until September 2.

At the basis of the new concert program is the idea of modern tradition - creating unusual collaborations between different musicians, discovering surprising, unique and previously unheard shades of colours. In the concert program “DAGAMBA feat TCHAIKOVSKY” there won't be only pieces by Pyotr Tchaikovsky, they will interact with the band's original music, overstepping the classical standards and making almost impossible things possible. The concert program will surprise with references to ballet's "Swan Lake", "Nutcracker" and Piano Concerto No.1 as well as other well known works of Tchaikovsky. A Secret Guest will also be taking part in the magnificent show and, of course, also Maestro himself.

"In memory of Tchaikovsky not only streets have been named after him in many countries, but also conservatoires, colleges, theatres, concert halls and even a symphony orchestra. Tchaikovsky is one of the grand’s of classical music and his influence is still very much present today. His music is used for soundtracks and video games, while going to the ballet "Nutcracker" during the Christmas holidays is a tradition for many families. "For this the reason our latest program is a collaboration with the Grand Maestro, almost as if he would still be alive and living among us, as his music does," explains band's leader Valters Pūce.

"Only when we started working on the new program did we realise what a challenge it will be to work with the romantic and intense music of Tchaikovsky. It has so much emotion and melody, while DAGAMBA adds dynamism and rhythm so typical to rock music," says pianist Dainis Tenis.